Over and above the commercial functions, the Board takes up many developmental activities, R&D and training programme with a view to improve the genetic potential of the cattle population for milk production as well as the Feeding and management practices of livestock in the State.

The major proportion of the goat population in Kerala belongs to Malabari breed and is well adapted to the agro-climatic conditions of the State. As a part of the diversification programme, the Board, during the year 1990-91, started a pilot project on goats at Kulathupuzha.

The objectives of the project were:

Conservation and Improvement of Malabari Goats

Through Field Performance Recording and Buck

In order to have a substantial improvement in the goat production sector, this scheme has been initiated under Plan funds from Government of Kerala, which envisage the following components 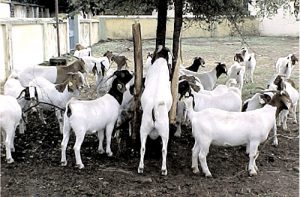 Boer goats are considered far superior to any other goats for meat production. It is known for rapid weight gain and heavy muscling and has high fertility. Boers typically give birth to twins. Crosses of local goats with Boers have proved to be a suitable genotype for the goat production system and well adapted to all types of climate. Within the confines of the general farmer of Kerala, high heat, seasonal rainfall and humidity should not compromise the performance of Boer goats.

The objectives of the programme were: