The State has evolved a three-tier Artificial Insemination (A.I.) management system to provide the inputs for cattle breeding namely

The KLD Board has 3 bull stations located at Mattupatti, Kulathupuzha and Dhoni.  All these stations keep breeding bulls for frozen semen production.  While the Mattupatti farm houses both the Sunandini and exotic bulls, Dhoni and Kulathupuzha farms have only the Sunandini bulls. Dhoni also maintains Murrah buffalo bulls.

The frozen semen laboratories are periodically updated to match the standards of any such stations. All the required infrastructure and equipments as per the Minimum Standards Protocol (MSP) of the Government of India are available and used for production of high quality frozen semen doses.  The bull stations are producing about 30 lakh doses of frozen semen annually.  .

The State has developed an efficient Three Tier AI organization where all the AI centres were brought under frozen semen programme in a phased manner. The roles of the different participating agencies were clearly defined.  The selection of breeding bulls, operation of the breeding programme by way of production and supply of frozen semen was the responsibility of the KLD Board whereas the actual conduct of AI was mainly carried out by the Animal Husbandry Department.  The set up of AI organization required may be seen from the following figure. 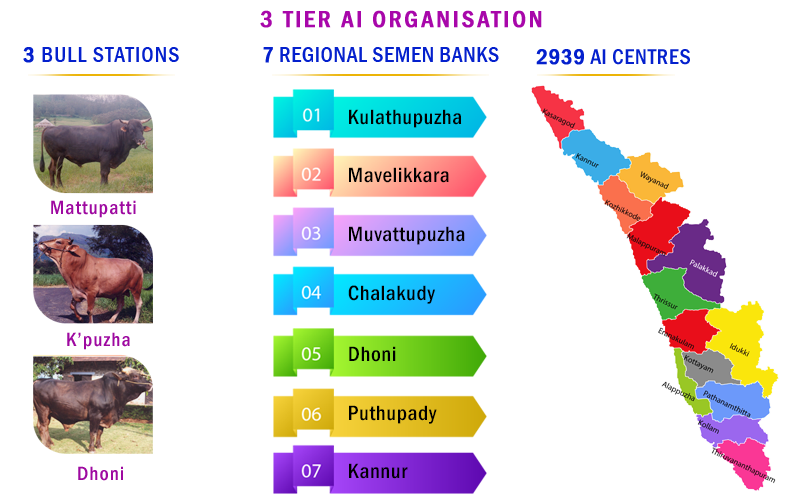 The frozen semen doses produced at the bull stations of Mattupatti, Kulathupuzha and Dhoni are used at the AI centres scattered throughout the State. The Board is the sole agency responsible for the distribution of frozen semen and Liquid Nitrogen to all the AI centres of the state, thereby, acting as an agency regulating the breeding policy of the State. The Board has established 7 RSBs in different parts of the State for this purpose.

Artificial Insemination (AI) is being carried out in the State mainly by the Animal Husbandry Department  Milk Unions. Dairy Development Department and private agencies are also involved, though to a lesser extent. On an average, an AI centre covers 350 breedable females. The number of AI centres in the state has been steadily increasing through the years resulting in an efficient coverage of the breedable population. of late, the increase in the overall semen intake has drastically reduced.

Growth of AI centers over the years

Eight litre capacity LN refrigerators were initially being used for storing frozen semen at the AI centres. (LR-10 of Union Carbide) Later, the Board realized that depending on imported containers alone would not be advisable. Among the few companies who came forward with indigenous containers, the IBP Co. (Presently Indian Oil Corporation) was the most promising. The earliest introduction was the BA-11 (11 lit. container) which had a longer refilling interval, i.e., 21 days under field conditions. The next generation container, BA-7 (7 lit. container) when introduced, had several problems like higher evaporation, higher damage rate etc. However, over the years, it has been refined. At present, almost all the field refrigerators are of BA – 7 type. BA-7 is the preferred one because of its compactness, thermodynamic efficiency and a comparatively lesser weight. More important is the fact that the refilling interval is 21 days (similar to that of the BA-11) with a lesser LN requirement for refilling (an average of 5 lit/container). Recently M/s.Inox India Ltd. has also come forward with IR7 container which equates with the BA-7 in every respect.

In order to increase the coverage of AI and to improve the reproductive efficiency a mobile AI programme was attempted  so as to provide breeding services at the abode of the cows. As a first step, a trial programme was started in selected centres in each district. A twin container system using BA-35/IX-35 and BA-7/IR-7 is being followed for the programme. A total of 36 centres in the State are provided with the mobile AI cryocans.  However, the result of this trial were not encouraging and hence not proceeded with. Efforts are also being made at the conversion of stationery AI centres into mobile centre by providing transport crates suitable to hold BA-7 refrigerators and to be fitted to motorbikes.