The Board had taken up fodder development as one of the most important activities right from its inception. To provide proper nourishment for the improved cattle population of the state the Board could identify and develop a number of high yielding fodder varieties suitable for different agro climatic conditions in the state.

The fodder wing of the Board has four major responsibilities

The Mattupatti farm has extensive natural and improved grasslands for grazing and hay making.

The natural grasslands at Mattupatti have unique grass combinations. The major species found are Ischaemum indicum, Heteropogon contortus, Chrysopogon asper, Pennisetum clandestinum etc. which are well adapted to the local environment. Apart from the native species, these grasslands also have the introduced high yielding fodder varieties like Setaria anceps, Brachiaria decumbens, Melinis minutiflora etc. and legumes like White clover and Desmodium. Utmost care is taken by way of controlled grazing, timely weeding and fertilizer application so that the grass combinations and their productivity could be maintained.

The bulk of the arable land in the farms is used for grass production. Green production from leys is influenced by factors like light, moisture, soil nutrients etc. Sprinkler irrigation is undertaken in a limited area during summer months utilizing the limited water resources for the production of green for stall feeding during lean season.

The dung, urine and shed washings are recycled from the sheds for application to the leys in the form of slurry which reduces the expense on inorganic fertilizers. It is also an eco friendly way of disposing off the effluents.

The feeding regime followed could be classified into three, according to the season and the availability of fodder

During the flush season, fodder, mainly in the form of green grass/legumes and hay is fed to the animals. The season lasts for about 245 days. The surplus green available during flush season is preserved for the dry season feeding, which is characterized by the absence of grazing. The fodder requirements of the dry season are met by feeding silage, hay and limited quantity cut fodder from the irrigated leys. The season lasts for about 4 months. The maximum possible nutrient requirements of animals are met from fodder (roughages) limiting the use of concentrate feeds to the bare minimum. The entire roughage requirements are met from within the farm itself. The excess hay produced is sold to agencies like the Department of Animal Husbandry and private institutions/farmers.

The major varieties at Mattupatti

The Kolahalamedu farm which comprises of base farm, rolling hills at Vagamon and Devaswom land, also has extensive natural and improved grasslands. Stall feeding of cattle is practiced as the Vagamon and Devaswom lands are situated away from base farm. The excess fodder available during flush season is preserved as hay for lean season feeding. Tropical grasses like setaria grass, Signal grass, Congosignal and Hybrid napier grow well here.

The farm has well established grasslands with grass legume combination. The grasses are mainly Guinea grass, Congosignal and Setaria The major legume is Stylosanthes.  Subabul is also cultivated to a large extent. The grazing pastures are limited. Grazing of cows is practiced during flush season and grazing of goats is practiced year round.

The Dhoni farm also has a fodder pelleting unit. A portion of the hay produced in the farm is enriched by adding Cereals, Rice bran, Mineral mixture salt to taste and molasses as adhesive and converted to fodder pellets. These fodder pellets can be stored for around 3 months. The fodder pellets are fed on limited scale to milking animals.

The farm has well established grasslands with improved fodder varieties. Grazing is limited to cows in milk during the flush season. Stall feeding of animals is generally practiced. Flush season feeding is mainly green fodder. During the dry season the shortage of green fodder is overcome by feeding hay produced in the farm from the excess forage in the flush season.

Around 200 registered seed growers are involved in the commercial seed production activities in the high ranges of Idukki district. The quantity of seed produced by individual seed growers varies from 10 to 200kg.

A seed testing laboratory started functioning during 1983 at Dhoni. It is one of the two laboratories available in the country for the quality testing of tropical forage seeds and can handle 5000 samples in a year. It acts as the centre for quality control of the entire quantity of seed produced and procured by the Board.

Fodder seed samples are drawn from seed lots at the farmers’ premises and tested at the seed testing laboratory for purity and germination. The samples conforming to the quality standards alone are accepted.

A central store with a storage capacity of 125 tons also started functioning at Dhoni during 1983. A cool room for long term storage of basic seeds and surplus commercial seed has since been added to the facilities. This store is equipped with a seed drier, seed cleaner and grader. This laboratory has been approved as the State Fodder Seed Testing Laboratory by the Government of Kerala. 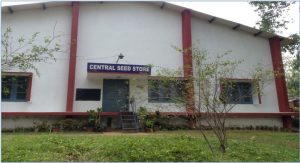 The technical inputs required for the fodder development activities of the state are provided by the fodder wing of the Board with Dhoni and Kolahalamedu as the operational headquarters. for the northern and southern regions respectively.