Kerala never had a cattle breed of its own. The cattle were non-descript and low producers. The state has never been recognized as an area suitable for dairying. However the non-descript cattle evolved through natural selection extending over centuries were very well adapted to the warm, humid, disease prone situation in the state with scanty feed resources.

In the 1950’s, the government policy was to upgrade the local nondescript (ND) cattle using improved dairy breeds like Sindhi, from outside the State (Key Village Scheme).  Based on the data from the military farms, the Government of India decided to experiment with crossbreeding, using exotic Jersey breed in selected areas.  Accordingly, a crossbreeding programme was implemented in the State in Neyyattinkara and Chalakudy.  Large-scale cross breeding using exotic breeds and AI as tool was however introduced in 1963 with the establishment of the Indo Swiss Project. The breeding activities were aimed at the evolution of a new breed combining the positive qualities of the local non descript cattle like adaptability, resistance to diseases, strong hoof, etc. and the high production potential of the exotic donor breed, Brown Swiss.  Non-descript cows purchased locally and housed in the breeding farm were inseminated with frozen semen brought from Switzerland. Subsequently,  Brown Swiss breeding bulls were imported in 1965 and frozen semen production started at Mattupatti.

Since the Indo Swiss project used the frozen semen programme for AI they could regulate the breeding as per a planned mating programme. The breeding programme was implemented by the ISPK in its extension areas in the early years using Brown Swiss breed.  In the Northern districts the Departments of AH & DD were following a grading up programme using Jersey. There were different views about the suitability of the donor breeds. For a number of years, the breed barrier – “Brown Swiss and Jersey zones” – continued to be an issue.  Subsequently during 1978 after the formation of the Board, the farmers demanded supply of semen according to their choice of breed and the Government decided to lift the breed barrier. Further, the Board was directed to make available semen from Brown Swiss, Jersey, Holstein Friesian and their crossbreds. These changes necessitated modifications to the breeding policy and the Government appointed an Expert Committee to examine the objectives and priorities of cattle breeding programme in the State (1979).

During 1980, the committee recommended a relatively simple programme to limit the level of exotic inheritance to around 50 % and practice intensive selection within the crossbred population especially the sires’ through progeny testing.

Some recommendations of the committee

A second committee reviewed the findings and on the basis of its recommendations, the Government issued formal orders on the cattle breeding policy for the state (1992).

The lessons learnt during the implementation of the cross breeding programmes in Kerala were valuable inputs in the formulation of the National Livestock Policy. Another committee appointed by the Government to evaluate and formulate livestock breeding programme and policies in the State, suggested some modification (1998) and the report was accepted . 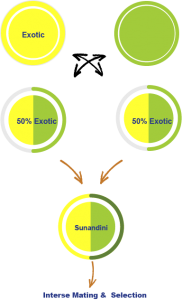 Again in 2005, Government of Kerala constituted an Expert Committee to review the Breeding Policy that existed and to suggest changes. The report of the committee was examined, discussed in detail and approved as the Cattle Breeding Policy of the State 2008.